The last day of August was a very special day. Our good friend, neighbor, and S Judge Cheryl Holekamp rode her Dressage Foundation sponsored Century Ride. On her 70th birthday, she rode her Trakehner stallion, Windfall, for judges Nataly Lamping and Jody Ely plus representatives from Eventing Nation and about 30 guests. She has owned him since before he won Rolex and then competed on the 2004 bronze medal team at Athens under Darren Chiacchia.When Windfall’s eventing career was over, Cheryl took him all the way to Grand Prix and earned the scores she needed to qualify as as S candidate. 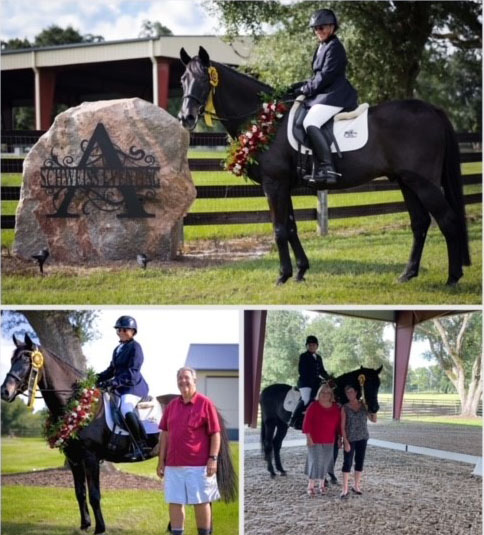 Windfall has also sired two horses who have been selected to compete for the USET, an extraordinary accomplishment.Shown here last week performing a lovely training level test at age 30, he scored all sevens and eights!After the ride and the award, we all adjourned across the street for champagne and barbecue at the Holekamp home. A totally splendid afternoon and especially wonderful for everyone who remembers Windfall as an international champion.