“Fomenting Citoyen Activism Since Shortly After December 26, 1950”
“Sunshine is the best disinfectant”
former Associate Justice of the US Supreme Court, Louis Brandeis

Be informed regarding potential legislative action in Tallahassee. We are seeing, more and more, decisions being made in Tallahassee which are contrary to the “home rule” charter in our Florida Constitution. The “Keep it Local Florida” initiative has been created by the Florida Association of Counties.

Just a quick reminder that all of the very good work that was done in planned development in Florida over the last 20 years is about to be abandoned. Up until the last election, a developer had to show that a requested new development plan was compatible with the surrounding area—i.e., don’t put an urban type of development in the middle of an area of horse farms, such as we have in Marion County. Someone requesting a permit to develop also had to show that there was a NEED for new housing inventory in an area.
Now, all bets are off, and one can pretty much build anything anywhere if they want to.

The very good letter below explains quite well what we could be facing soon. Our new elected officials, led by Governor Rick Scott, have introduced legislation that puts an end to the cutting edge rules for development of the last 20 years, and which will allow a random free-for-all in development. Literally.

Please read below, and then take a minute to contact your elected officials, letting them know what you think of the new approach to growth management (which is to say, ‘no more management.’)

Some of you may remember that Lynn Recio and I stopped an incompatible development proposal a few years back by proving that there was no need for 1600 new homes on 400 acres in the middle of horse country and 1-home-per-10 acres-zoning. But our new legislators are trying to insure that there no longer are any state laws that would allow us to repeat that success.

Please contact your State Representative and Senator ASAP and tell them what you think. Beautiful areas of Florida are already disappearing at an alarming rate—let’s not let everything be made into endless subdivisions because of a relatively small number of developers who control the conversation these days.

A Bygone Triumph
We need more of these again!

At the Florida State government’s Cabinet meeting at which Susan spoke, Gov. Crist told Woods, “I want to thank you for your tenacity, your candor, and your hard work.” Woods, who had served as her own lawyer through the two and a half year-long battle, personally made the motion to support DCA staff’s suggestion calling on the County Commission to pull the plug on the project. 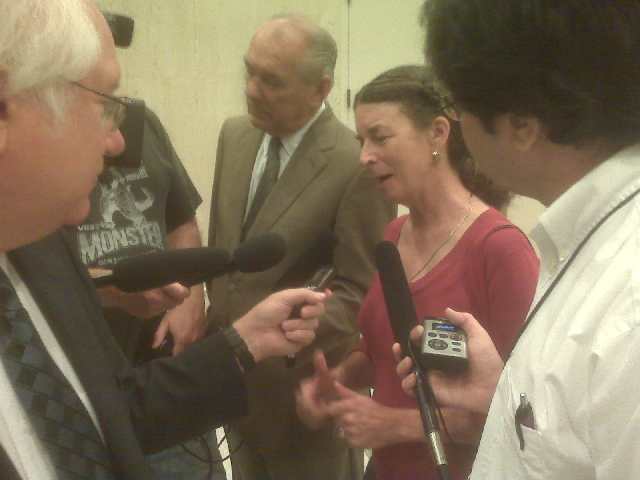 A lone citizen’s challenge to a land use change approved by the Marion County Commission in 2007 will be taken up Tuesday by the Florida Cabinet in what has evolved into a landmark growth-management case of statewide significance.
The Cabinet – Gov. Charlie Crist, Attorney General Bill McCollum, Chief Financial Officer Alex Sink and Agriculture Commissioner Charles Bronson – will hear the case of Susan Woods v. Marion County. The David vs. Goliath case has a single citizen taking on big development and revolves around the County Commission’s vote to change 396 acres of farmland off West U.S. 27 from rural to medium-density residential. Castro Realty Corp. sought the land-use change so it could build 790 houses on the rolling pastures.

In reaching its 3-2 decision, the commission ignored the recommendation of its own planning staff, which concluded the houses were not needed in an already glutted housing market.

The commission’s action was sent to the Department of Community Affairs for final approval, which it got.
Enter horse farmer Susan Woods. The environmentally active Woods challenged the County Commission’s decision. She argued the project was not compatible with the rural, horse-farm character of the area. She argued that so many houses would harm the aquifer because of the karst topography. She, finally, argued the county had failed to meet the long-accepted “demonstration of need” benchmark.

With no lawyer in tow, she took her case to DCA. She won a rare, almost unheard-of reversal of DCA’s decision. More important, Woods won DCA support through the remainder of the process, including from DCA Secretary Tom Pelham personally.

For more of the story CLICK THIS – AND THIS

The opposite of Good is not Evil.
It is Apathy.

It seems to me (Susan) that the kind of water-intensive cattle farming needed to sustain the volume of animals planned for the Adena Springs Ranch will surely make our current water shortages look small compared to what Adena Springs will need to produce steaks, ribs and burgers. See this link: CLICK HERE!

Influencing Growth Management at the State and County level

Sierra Club Florida believes that Growth Management is key to the survival of Florida, and that we can help protect Florida's natural systems through efficient use of land, and resources. We continue to promote environmentally sound growth management practices throughout the state, recover from the loss of DCA, and fight sprawl.

SC Florida Committees usually have 7 or 8 members and hold meetings via conference call and via email. We need volunteers to do this work. We do not have paid staff.
Without a committee, all the work will fall to the local groups.

What you can do locally:
Advocate for Environmentally-sound Development

Influence land use planning by participating in the process to amend local Comprehensive Plan. Be alert to rushed Comp Plan Changes.

Influence Growth Legislation through your Group or by joining up with our Florida Legislative Committee.

You can find the GM issues Sierra Club Florida is working on by looking at the SC Florida Legislative Priorities and updates on the Legislative Advisory Committee page.

Sprawl sends new urban development away from our city centers and outward into our farmland, forests, and wild places. It creates a need for more city infrastructure on land that was once undeveloped or productive farming or timber land. Bigger roads, more water supplies, energy lines, hospitals, schools and community safety must all be provided to new sprawl city residents and paid for by county taxpayers.

What can we do to stop it? Sierra Club works to change our local and state laws which promote bad development. We fight development which affects our wild places and important natural resources. We propose transportation solutions and community growth options which protect our air and water and wildlife.

As we educate Floridians about the cost to themselves and to our environment. We will advocate and work for stronger growth management laws in our state.

Think sprawl is only about hurting your environment? What about the pain to your wallet? Find a Florida county near you and figure out if you can afford to allow sprawl to continue. Check out The price of sprawl

What do smart growth and infill development look like? These computer-generated simulations are designed to demonstrate how sprawling communities can be revitalized and made more livable. See Community transformations

For all of you Marion County farm owners/dwellers who are already living in an environmentally-friendly way, you will probably qualify for the "Farms of Environmental Distinction" stamp of approval, which gives you the right to display the absolutely free and very tasteful metal sign that declares your accomplishment.

One of the goals of this program, sponsored by the Marion County Soil and Water District Commission, is to promote best management practices on area farms. Another goal is to reward those who have made the effort to run an environmentally-friendly farm. The third is to let passers-by know that we farm people are part of the solution, not the problem!

If you care to get your own sign, contact Bill Steele, in Citra, at 595-4677. He will come to your farm, have a look around, make gentle suggestions if needed, and award your sign. In the bargain, you'll make a friend--Bill's a great guy, and there's no hidden agenda here to "inspect" your farm and turn you in to the environmental police if you're doing something wrong. It's absolutely a win-win for us and for the environment.

Call him now, and pass the word to your other farm friends.

If you want to look at the signs, just drive down NW 90th Ave from Hwy 326--there are already signs at my farm and a couple of others--see for yourself.