Early onset Alzheimer’s claimed Susan on April 16th this year.She passed away peacefully in her sleep. We appreciate all your kindnesses and prayers.

For many years Susan judged dressage shows and horse trials all around the Southeast, taught students at Four Winds Farm, and conducted clinics around the state. Her students showed through the FEI levels.

Born and raised as a city kid in Providence, RI, Susan begged, borrowed and practically stole in order to get her first riding lessons, then subsequently did competitive trail riding as a teenager, but her visit to Boston to see the real Spanish Riding School perform when she was 12 was what galvanized her determination to do dressage. However, it wasn’t until she met Bill ten years later that she found someone with whom she could walk through that door. 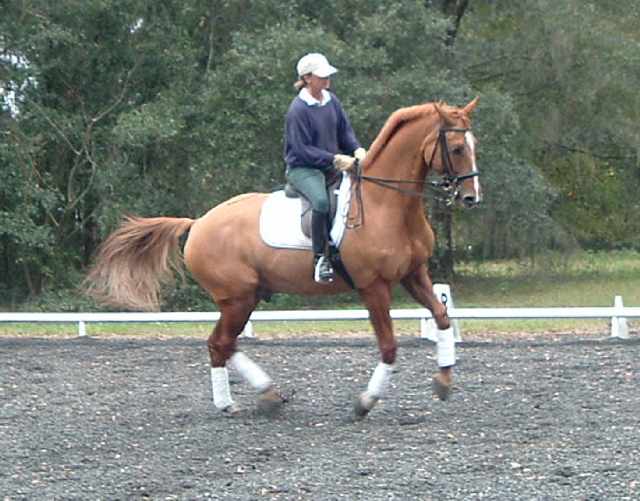 By the 1980s she had gained favor at several USDF National Instructors’ Seminars and in 1987 was chosen by the USDF to spread the message by conducting Regional Instructors’ Workshops. A USEF “R” judge for dressage shows and horse trials, she also judged dressage at combined driving events. She showed at all levels from Training through Intermediaire, earning her USDF Bronze and Silver Medals. She trained horses at Grand Prix, created and rode Musical Freestyles, and rode Pas de Deux in exhibitions.

Susan was a self-taught environmentalist, working many hours a week on land use, farmland preservation, and water management issues in north central Florida. She was the founder and president of the Floridan Aquifer Legal Defense Organization and networked daily with many like-minded people via her email lists. She was also a certified National Wildlife Federation Backyard Habitat Steward.

And as if that weren’t enough, she was a Reiki Master, an animal communicator and shamanic practitioner in the tradition of the Qero people of the Andes. Now you can understand why she never had time to clean her house.

(If you don’t already know) What is Reiki? Click here

Susan’s environmental causes and her concerns for the sanctity of the land and water are detailed on this page: The Monkeywench Gang.

Written early in the 2000s, Susan calls your attention to a variety of books, movies, and worthwhile websites which she feels deserve a look.

Photos of Susan in action and in repose —   CLICK THIS