(with apologies to Grace Slick and Paul Kantner)

“We must all grow old but you can always act immature.” Those are words I live by, although allow me to suggest as riders we must make certain concessions to Mother Time. While you “may only be as old as you feel,” at some point an honest appraisal of how stiff, how creaky, and how fragile you really are is just part of facing reality. Sure, you used to climb on just about anything, but if you are in your 60s (or thereabouts), there is no shame in having someone younger and more expendable break that colt. I am a big fan of finding an “appropriate” horse—specifically one you can have fun on and not risk your life!

Twice I have judged USDF Century Rides. That’s an award you receive if the combined age of you and the horse you are showing totals 100 years or more. They don’t occur very frequently, and it’s always a big deal. A special ribbon is sent from headquarters in 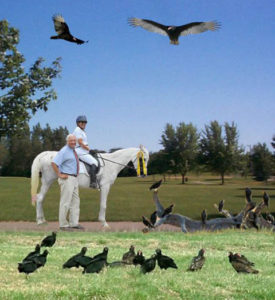 Kentucky, the show pauses, pictures are taken. Often a champagne cork pops. One hundred years! After one such occasional, I made some Photoshop adjustments to the celebratory picture and sent it to USDF. The rider thought it was hilarious, but the editors declared it in poor taste and did not deign to print it.

Another time I was judging a lady of 74 years when her horse misbehaved and dumped her onto the arena boards. Unfortunately, she left the show grounds in an ambulance and was later diagnosed with a broken back. That did not deter her. Ten years later I was judging at that same venue, and here she was again in my ring, this time at age 84, accomplishing her Century Ride. Alma was one tough cookie!

Many years ago at my first teaching job, we had a string of school horses, and we more or less taught all comers. A lesson had been scheduled over the phone, and my partner had made sure that I would be teaching it, not she. At the appointed time two sisters arrived. They had signed up for a fall foliage ride in Vermont and wanted to practice once before they embarked on their vacation.
“Have you ridden before?” I asked them.
“Oh, yes,” one assured me. “I rode in Spain 55 years ago.” The other sister piped up, “I remember riding 40 years ago.”
I chose old U-Haul and Constable for them—the most patient, docile creatures in the barn—and spent the next 45 minutes at the walk mostly just hoping to keep them alive.
As the lesson concluded, greatly relieved I said, “Here, I’ll put them away for you.”
With that, as they went tottering off across the parking lot, lighting their cigarettes, I overheard one say to the other, “They weren’t very good horses. It was much easier the last time!”