I have been riding now for something like 52 years and teaching in some fashion or another for 46. You would think by now I could take anything you threw at me pretty much in stride. But NOOOO . . .

I was teaching a woman last week – not my best student but someone who has ridden with me a long time and has taught her own horse some fairly sophisticated things –half pass and flying changes among them. 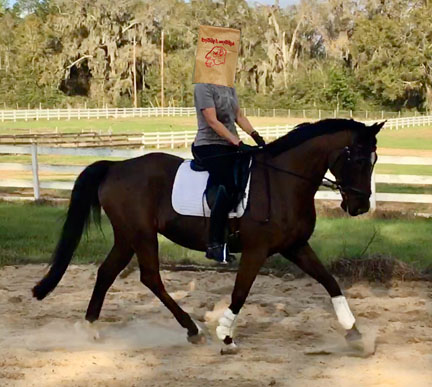 This week her own mare was temporarily out of commission, and a friend generously lent her a Fourth Level horse (pictured) for her lesson. In the course of the ride she stopped and said something so astounding that after I caught my breath I wrote it down for posterity.

“I think I’m trying to be nice and soft,” she said wonderingly. “I can’t understand why he would want to evade me.”

I managed to temper my response, but my initial reaction was “and they let you have children?”

Perhaps if she had listened to herself before she spoke, she would’ve realized the absurdity of her comment. Once again, it goes back to the basic notion of just because they know something doesn’t mean they’ll do it automatically or at least automatically and correctly. Inclusive in the idea of soft and submissive is obedience and respect. We are not talking fear or coercion here, but if they don’t believe you mean it and that you can tell the difference, horses know that the “path of least resistance” is just enough casual resistance to avoid having to work very hard.

Not long ago an errant Illinois student demanded to remain incognito on the blog which depicted her, hence the Jewel/Osco bag photoshopped over her head. Susannah (not her real name) is a full-time southerner. That’s why her bag is from Piggly Wiggly.