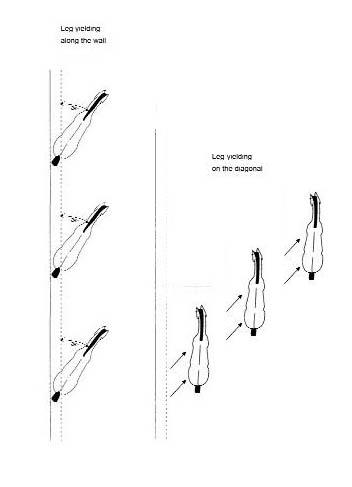 BILL: Pretty good chance it’s because when he asks for a renvers (haunches out), you give him a travers (haunches in). If so, you are not alone in making this mistake. People do this to me all the time because, after all, travers—where you leave the forehand on the track and displace the quarters to the inside, bending your horse
around your inner leg—is the much more common movement.

Shoulder-in can be thought of as a leg yielding upon which you super-impose an equal bending through the length of the horse—the first stride of a ten meter circle carried forward and sideways down the track. The horse is still looking away from the direction of movement. Shoulder-in, classically, is both a suppling exercise and a collecting one since it makes the inside hind leg step up under the horse’s body thereby shifting more weight onto his hindquarters.

Let’s jump back a few mental steps, though, and review the lateral movements in order, as per the USEF rulebook from which these diagrams are borrowed and modified. As you should recall, leg yielding is done with a straight horse positioned only at the poll away from the direction of movement. The horse’s neck comes straight and without bend out of the shoulders. The horse’s shoulders and hips are parallel to each other. Good leg yielding lets you teach the horse to stay in lateral balance while he’s moving away from the leg. It can be performed in a variety of figures: tail to the wall [as shown below on the left], nose to the wall, on the diagonal of the arena [as shown below on the right], or on a circle, either forehand in or forehand out.

The adjacent diagram shows the difference between leg yield and shoulder-in. The angle relative to the wall is the same, and in both cases the horse moves on three tracks. However, in shoulder-in, the hips and shoulders are no longer parallel. The horse’s hips remain perpendicular to the wall, and because he bends through the length of his body, the shoulders are angled relative to his hips by some 35 degrees.

Travers (remember, that’s haunches IN) is conceptually a different kettle of cod. By riding it as the last stride of a ten meter circle carried forward and sideways down the track, the horse must understand moving away from one leg (the outside one) while staying bent around the inside one. When performing this movement, the horse should look straight down the track on which he’s traveling.

Now the dressage gods throw you a curve. Renvers isn’t a different movement. It’s just what we call a travers when it is done in a different place. The picture at left illustrates this. To the right of the arena wall is a horse making right travers. He is bent around the rider’s right leg, he’s looking to the right, and he’s moving away from the rider’s left leg as he travels down the track. He is making what, alternately, we call a haunches-in.

On the left side of the same diagram is a horse in just the same alignment, performing exactly the same movement, but the wall is on the “wrong” side of him. Now instead of his shoulders being near the track with his haunches IN (away from the wall), his shoulders are off the track and his haunches are OUT (towards the wall). You could say that he’s doing the reverse of a travers— which we call renvers or haunches-out.

Got it? It’s just semantics. There’s only one physical configuration where the horse makes a lateral movement moving towards the direction he’s looking. He can do it on either hand and he can do
it with his hindquarters near the wall or away from it. Travers right is also renvers left. Somebody just moved the wall!

Renvers has lots of interesting applications, but I can’t think of anyone who would teach renvers before travers. Travers is easier to negotiate in the beginning because the wall makes an obvious guide down which you ride the horse’s forehand. Then you just visualize one of those big gang plows that road crews use to clear wide swaths of northern interstate highway during blizzards. Drop those haunches off to the inside and think of plowing the lane beside you too. 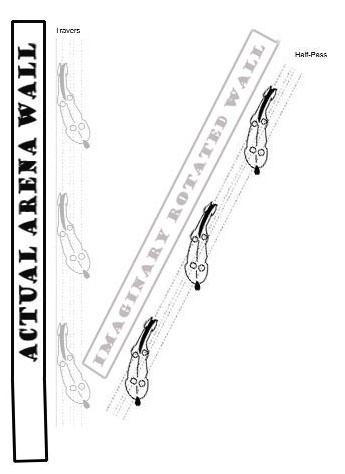 This final diagram reveals another mischievous bit of nomenclature. Rotate the wall 30 degrees so it stretches across the arena’s diagonal, ride a travers along that imaginary wall, and it is now called a half pass. In fact, in many countries half pass is referred to as traversal—a travers across the diagonal.

By the way, although travers shows up in the tests in Second Level and the half pass doesn’t appear until Third, if you can create your own visual reference points without needing the wall as a crutch, many riders find it easier to teach the concept of moving the horse laterally into the direction he’s bent out in the open rather than along the wall, That way, if the horse collapses against the rider’s inner leg and counter bends (as they often do in the beginning), you can use shoulder-in.

On a line parallel to the original wall to correct the bend and put the horse back in balance and into the outside rein. This is the so-called “staircase exercise” practiced universally as a corrective measure.

Having gone all the way around the block the long way to explain what was dismaying your instructor, the simple facts to remember are: