In last month’s article on the “ABC’s”, Kyra Kyrklund discussed displacing the horse’s shoulders laterally — the so called “box turn.” Another of Kyra’s fundamental exercises is the leg yield. In the beginning, she counsels, just be sure you can move the horse sideways. Initially, don’t be over-concerned about which way the horse is looking or if he is on the bit. As the term indicates, your basic goal is to be sure that the horse YIELDS to the LEG. 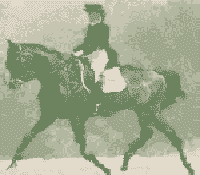 For this movement, Kyra applies her inside pushing leg slightly behind the girth. As soon as the horse responds, she relaxes her leg and lets the horse carry himself sideways. One common rider fault, she notes, is the tendency to “bulldoze” the horse sideways with an unrelenting (unrewarding) leg. The analogy she makes is that of the “sledge,” a sort of Scandinavian snow scooter on which you stand with one leg and push off with the other. Once moving on the ice, the sledge glides on its own without any pushing. Only when it slows down, is it time to give it another push. According to Kyra, a horse that is well-schooled in leg yielding should be able to move laterally with the rider’s leg “more or less near” his side, accepting intermittent leg reminders, but not needing a continuous squeeze or push.

The other principal aid is the outside rein, which controls the horse’s outer shoulder and keeps him aligned. If the haunches trail, the outside rein can make the shoulders “wait” till the quarters catch up. In a proper leg yield, the horse should be positioned at the poll back in the direction from which he is coming. However, in some cases, as the leg yield began, Kyra asked the rider to take the horse enough on the outside rein that he might even look slightly towards the direction of movement. Once this outer rein contact is established, then the rider can use the inner rein to position the poll correctly. As Kyra reminds, “Be sure the horse’s neck comes straight out of his shoulder. Don’t try to make inner flexion if the horse is overbending to the inside or popping his outside shoulder.”

Meanwhile the outside leg keeps the horse thinking forward, and the inner rein invites suppleness and inner position at the poll. The inside hand should not cross the neck or throw the horse sideways. The rider should be able to release the inner rein during the yielding without losing the line, the positioning, or the flexion at the poll.

Watching her work, it’s obvious that Kyra makes a distinction between “doing” a lateral movement and “using” one. It is a relatively small percentage of the time that she practices whole long lines of leg yielding, shoulder in, or half pass. With the leg yielding exercise, she demonstrated that sometimes with a difficult horse, she will yield several steps forward and sideways in the walk and then halt briefly. This helps her regain the horse’s attention and balance, after which she will resume the leg yield on the same line, directly out of the halt.

The topic of next month’s installment in this series is Developing Collection, and as you might guess, it will cover the uses of shoulder-in in some detail. First, however, Kyra dealt with how to perform the basic movement correctly. She observed that very often when riders attempt a shoulder-in, they leave the horse’s shoulders on the track and merely push the haunches to the outside. Remember, instead, to place the shoulders on the inside track and bend the whole horse, enabling you to load the inside hind leg.

With the Second Level demo horse, Kyra focused on perfect voltes in walk and trot, with the ribcage bending around the inner leg, the hindquarters held on the circle track with the outside leg, and the horse being turned with the weight and outside rein. The rider should be able to release the inside rein as a reward to the horse without losing the bend or flexion.

One exercise put the horse on a 20 meter circle between B and E. At each letter, the horse was asked to make an eight meter circle, maintaining his rhythm and length of stride. Kyra pinpointed typical escapes: 1) the horse falling over his outside shoulder while pulling against the inside rein or, 2) the horse sliding his haunches onto a larger circle to avoid carrying his weight behind. Kyra emphasized not to over-drive with the inner leg and the need to keep the horse connected on the outside rein. Whenever the horse wanted to get stuck on the hand or bulge through the outside aids, she asked the rider to halt, re-establish order, and then resume the figure. “The rider,” she said, “must feel like she can sit on the horse’s hindlegs.”

Only when the circle can be ridden flawlessly and with the horse in front of the leg, does Kyra ask for the actual shoulder-in. Then the rider makes a complete eight meter circle and, upon returning to the track, continues about thirty degrees into the next circle. This alignment is then carried sideways down the track. Kyra stresses that in schooling, the specific angle is not as critical as that it can be maintained with consistency. “YOU must decide on the alignment,” she insists. “Don’t let the horse decide!” If the horse drifts off the chosen line, Kyra says simply, “Stop him. The movement can’t work if he can evade through the outside shoulder.” First, she recommends, be able to control the position and alignment. Then worry about bend and flexion.

While the horse was halted in shoulder-in position along the track, Kyra demonstrated the need to make subtle loosening flexions at the poll. “A horse will never be supple in his body-bending if he is tight in the poll and jaw,” she said. Loosening him within himself must precede more exaggerating bending or the horse will seize on it as one more avenue of resistance.

The rider should also only attempt shoulder-in on an angle that permits the horse to maintain his rhythm. Thus, she suggests the shoulder-fore on even less than three tracks for young horses. Once the horse is able to flow harmoniously along the track in a resistance-free shoulder-in, Kyra allows the rider to make the angle of the movement greater.

Kyra next discussed the travers and half pass. In these movements the horse is bent to the inside and moves in the direction towards which he is bending. Whereas shoulder-in is the first stride of a second circle carried laterally, Kyra explained that in travers, you don’t finish the “first” circle. As the forehand comes to the track, his front legs are brought down the line and the quarters are kept off the track and curved around the rider’s inner leg.

Half pass and travers are literally the same movement, just done in different places in the arena. In Swedish, in fact, the same word denotes both of them. Travers is usually done along the rail, on the circle, and on the centerline. The same movement performed across the diagonal is the half pass.

In travers and half pass the rider should sit to the inside. Many instructors speak of “sitting on the inside seatbone” in these movements. Kyra proposed that although this is true, she tells riders that as they displace their weight to the inside (without collapsing either hip), they will become more aware of their outside seatbone as it moves more towards the center of the saddle.

Kyra places great emphasis on being able to put the forehand on exactly the line the rider chooses. She also frequently employs the inner track, the quarter-line, and especially the centerline for the travers as well as the shoulder-in. In travers or half pass, if the horse loses energy or has trouble maintaining the correct angle, she re-positions him in leg yielding, makes him sharp to the leg, and then re-establishes the original bend.

Kyra’s overall approach to all the lateral movements is to break each one down into its basic elements, perfect each piece slowly and quietly, and then re-assemble the parts as both the horse and rider understand how they fit together and can do them automatically. Once everything feels fine, she says, don’t keep leaning on the “brake” or the “accelerator.” Have the courage to leave your horse alone and let him do it.